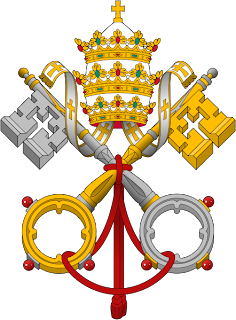 EXTRACTS FROM THE ACTS. SESSION II.

[immediately following the above-cited letter of the Pope to the Synod of Ephesus]
Philip the presbyter and legate of the Apostolic See said: There is no doubt, and in fact it has been known in all ages, that the holy and most blessed Peter, prince (exarkoV) and head of the Apostles, pillar of the faith, and foundation (qemelioV) of the Catholic Church, received the keys of the kingdom from our Lord Jesus Christ, the Saviour and Redeemer of the human race, and that to him was given the power of loosing and binding sins: who down even to to-day and forever both lives and judges in his successors. The holy and most blessed pope Coelestine, according to due order, is his successor and holds his place, and us he sent to supply his place in this holy synod, which the most humane and Christian Emperors have commanded to assemble, bearing in mind and continually watching over the Catholic faith.


EXTRACTS FROM THE ACTS. SESSION I.

Paschasinus, the most reverend bishop and legate of the Apostolic See, stood up in the midst with his most reverend colleagues and said: We received directions at the hands of the most blessed and apostolic bishop of the Roman city, which is the head of all the churches, which directions say that Dioscorus is not to be allowed a seat in this assembly, but that if he should attempt to take his seat he is to be cast out. This instruction we must carry out; if now your holiness so commands let him be expelled or else we leave.

EXTRACTS FROM THE ACTS. SESSION II. (continued).
After the reading of the foregoing epistle [the Tome of Leo], the most reverend bishops cried out: This is the faith of the fathers, this is the faith of the Apostles. So we all believe, thus the orthodox believe. Anathema to him who does not thus believe. Peter has spoken thus through Leo.

EXTRACTS FROM THE ACTS. SESSION IV
[Pope] Leo, Archbishop of all the churches, who condemned the heresy of Nestorius and Eutyches, shew what the true faith is.


EXTRACTS FROM THE ACTS. SESSION VII.

But we, bishops, answered him [Pope Vigilius]: "If your blessedness is willing to meet together with us and the most holy Patriarchs, and the most religious bishops, and to treat of the Three Chapters and to give, in unison with us all, a suitable form of the orthodox faith, as the Holy Apostles and the holy Fathers and the four Councils have done, we will hold thee as our head, as a [father] and primate...."

what the strength of our Apostolic faith contains, which we have received through Apostolic tradition and through the tradition of the Apostolical pontiffs,

And therefore I beseech you with a contrite heart and rivers of tears, with prostrated mind, deign to stretch forth your most clement right hand to the Apostolic doctrine which the co-worker of your pious labours, the blessed apostle Peter has delivered, that it be not hidden under a bushel, but that it be preached in the whole earth more shrilly than a bugle: because the true confession thereof for which Peter was pronounced blessed by the Lord of all things, was revealed by the Father of heaven, for he received from the Redeemer of all himself, by three commendations, the duty of feeding the spiritual sheep of the Church; under whose protecting shield, this Apostolic Church of his [i.e. Rome] has never turned away from the path of truth in any direction of error, whose authority, as that of the Prince of all the Apostles, the whole Catholic Church, and the Ecumenical Synods have faithfully embraced, and followed in all things; and all the venerable Fathers have embraced its Apostolic doctrine, through which they as the most approved luminaries of the Church of Christ have shone; and the holy orthodox doctors have venerated and followed it, while the heretics have pursued it with false criminations and with derogatory hatred.

If you persevere in that orthodox Faith in which you have begun, and the sacred and venerable images be by your means erected again in those parts, as by the lord, the Emperor Constantine of pious memory, and the blessed Helen, who promulgated the orthodox Faith, and exalted the holy Catholic and Apostolic Roman Church your spiritual mother, and with the other orthodox Emperors venerated it as the head of all Churches,

We greatly wondered that in your imperial commands, directed for the Patriarch of the royal city, Tarasius, we find him there called Universal: but we know not whether this was written through ignorance or schism, or the heresy of the wicked. But henceforth we advise your most merciful and imperial majesty, that he be by no means called Universal in your writings, because it appears to be contrary to the institutions of the holy Canons and the decrees of the traditions of the holy Fathers. For he never could have ranked second, save for the authority of our holy Catholic and Apostolic Church, as is plain to all. Because if he be named Universal, above the holy Roman Church which has a prior rank, which is the head of all the Churches of God, it is certain that he shews himself as a rebel against the holy Councils, and a heretic. For, if he is Universal, he is recognized to have the Primacy even over the Church of our See, which appears ridiculous to all faithful Christians: because in the whole world the chief rank and power was given to the blessed Apostle Peter by the Redeemer of the world himself; and through the same Apostle, whose place we unworthily hold, the holy Catholic and Apostolic Roman Church holds the first rank, and the authority of power, now and for ever.
Label: Dokumen-dokumen Gereja, Kepausan, Sejarah Gereja Katolik
Share:
Posting Lebih Baru Posting Lama