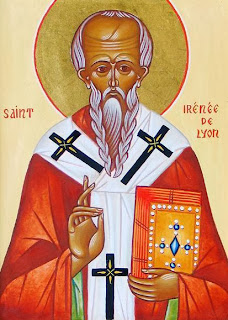 “We have learned from none others the plan of our salvation, than from those through whom the Gospel has come down to us, which they did at one time proclaim in public, and, at a later period, by the will of God, handed down to us in the Scriptures, to be the ground and pillar of our faith…. For, after our Lord rose from the dead, [the apostles] were invested with power from on high when the Holy Spirit came down [upon them], were filled from all [His gifts], and had perfect knowledge: they departed to the ends of the earth, preaching the glad tidings of the good things [sent] from God to us, and proclaiming the peace of heaven to men, who indeed do all equally and individually possess the Gospel of God. MATTHEW also published a gospel in writing among the Hebrews in their own language, while Peter & Paul were preaching the gospel and founding the church in Rome. But after their death, MARK, the disciple & interpreter of Peter, also transmitted to us in writing what Peter used to preach. And LUKE, Paul’s associate, also set down in a book the gospel that Paul used to preach. Later, JOHN, the Lord’s disciple—the one who lay on his lap—also set out the gospel while living at Ephesus in Asia Minor.“ 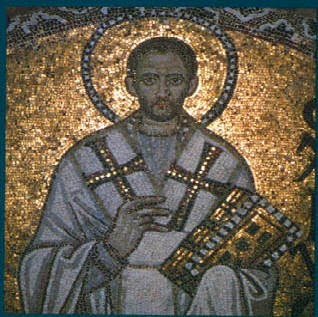 “First written was that according to MATTHEW, once publican but later apostle of Jesus Christ, who published it for the believers from Judaism, composed in Hebrew letters. Second was by MARK, who composed as Peter led him, whom he avowed as son in the catholic epistle, saying as follows: “She who is in Babylon, chosen together, sends you greetings and so does my son Mark.” [1 Pet. 5:17]. And third, that according to LUKE, who has composed for those from the Gentiles the gospel praised by Paul; after all of them, that according to JOHN.” (Comm. In Matth. I, quoted in Eusebius, History of the Church, 6, 25, 3-6.)