Home » Artikel Seputar Ajaran Katolik » Kepausan » Petrus » St. Peter as a Vicar of Christ based on Tradition of the Syriac Church of Antioch

St. Peter as a Vicar of Christ based on Tradition of the Syriac Church of Antioch 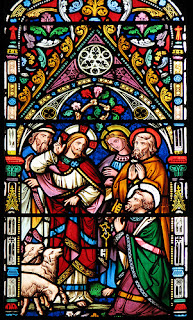 Here is Simon, whom the Lord thrice called upon (saying): “Feed Me My rams and My gentle sheep. I entrust thee with the keys of My spiritual treasury, that thou mayest bind and loose on carth and in heaven. I will install thee Vicar of the heavenly kingdom; rule justly, and govern the children of thy household (the Church)." Syro-Chaldean Liturgy in Comm. SS. Apost. Petri et Pauli. Cod. Vatic. (Syriac) 86, p. 35
Then Peter deservedly received the Vicariate (of Christ) over His people. St. Ephrem., in Sermone de Martyrio, SS. Ap. Petri et Pauli. Cod. Vatic. (Arabic); 199, p. 194, a tergo
And Simon Peter was their head (of the Apostles) ; holding the throne of Christ upon earth. Amrus Matthaei, Nestorian Hist. Cod. De Prop. (Arabic), 45, p. 63
I thas been naturally provided by the Creator that children should not disinherit their parents, but on the contrary, fathers should have authority over their children. . . . Now all perfection should prevail in the Holy Church; so that as one is the veritable Father, one His Son, our Saviour Jesus Christ, one His Spirit, the Paraclete; so also one is His faithful Vicar, Simon Barjona, who has been called (Kipho) the Rock, as (Christ) Himself had promised to him, saying: “Upon this Rock, I will build My Church.” And again, “ To thee i will give the keys of the kingdom of heaven.” Nestor. Synod.,(sub Patriarch Dadishoo). Cod. De Prop. (Syriac), 27, p.277.
source: The Tradition of the Syriac Church of Antioch, written by Most Rev. Cyril Behnam Benni (Syriac Archbishop of Mosul)
Pax et Bonum
Label: Artikel Seputar Ajaran Katolik, Kepausan, Petrus
Share:
Posting Lebih Baru Posting Lama